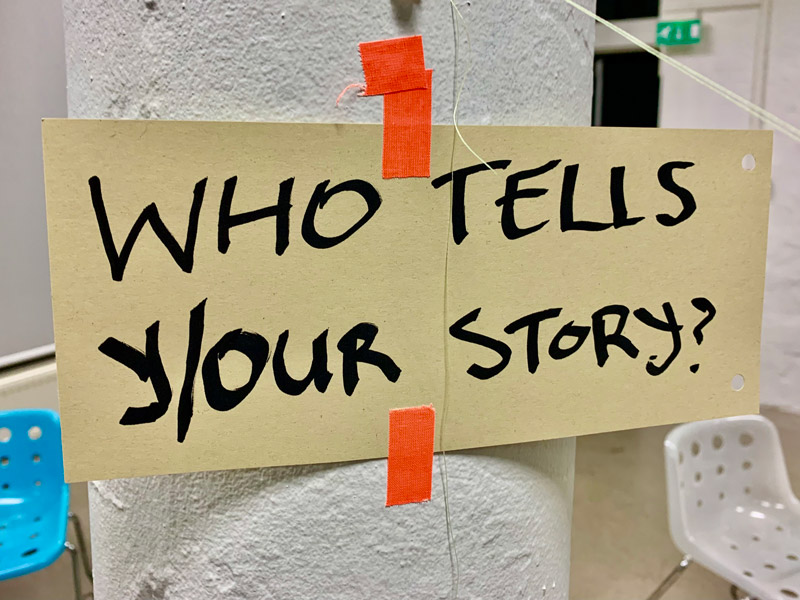 Merete Røstad and Per Roar, Mapping the field, “MEMORYWORK”, Departments of Arts and Crafts and Dance.

MEMORYWORK is a platform for sharing interdisciplinary artistic research on performative memory work. The project is developed by artists with backgrounds in Choreography, Theatre, Performance Art and Art in Public Spaces, and comes out of a research collaboration between the departments of Dance and Art & Craft at KHIO.

Per Roar works as a choreographer, performer, and artist-researcher, and has an interdisciplinary background and strong concern for socio-political matters. He combines strategies from social research with somatic approaches to make choreography and public art, as seen in his doctoral project Docudancing Griefscapes (2015) from UniArts Helsinki.

Per Roar holds the position as a Professor and Head of MA Choreography at the Department of Dance at KHIO, and is together with Merete Røstad, project leader of MEMORYWORK.

Eliot Moleba is a researcher, playwright and theatre director. He is one of the founding members of PlayRiot. He was the resident dramaturg at The South African State Theatre. He is currently a Research Fellow at KHiO and an Editorial Committee member of VIS – The Nordic Journal for Artistic Research.

Manuel Pelmuş.is a choreographer and artist who lives and works in Oslo and Bucharest. Pelmuş could be seen as one of the protagonists of the “new performance turn,” artists who have been reimagining the role of performance in the context of visual arts. He often deploys continuous live presence within the context of exhibitions, using enactment as a strategy and the human body as a medium and a means to explore the body’s relationship to memory and the construction of history. His projects have been featured at several major institutions internationally. Pelmuş was awarded the Berlin Art Prize for performance arts in 2012. He represented Romania at the 55th Venice Biennale with a collaborative project with Alexandra Pirici in 2013, and he received the prize for excellence from the National Dance Center of Bucharest in 2015. Manuel Pelmuş has since 2019 been a research fellow at the Academy of Fine Arts Oslo (KHIO) with his PhD project: https://khioda.khio.no/khio-xmlui/handle/11250/2618469

Myna Trustram has worked in England for many years as a historian, curator and academic. In 2021 she stopped paid work in institutions and focus now on being a writer. She writes short experimental essays in which she calls upon literary and academic forms to consider themes such as mourning, loss and separation.

Merete Røstad, PhD, is an interdisciplinary artist, researcher and educator whose projects are rooted in the examination of public life, resilience, remembrance, and archives. Frequently engaging with communities and the public sphere, her process-based practice explores our everyday interactions with the histories inscribed in our surroundings and how we come to read the traces to be found there. Each examines the social and political significance of a site as a starting point for thinking about collective memory to activate alternative modes of memorialization in the public sphere.

Røstad completed her doctorate in Artistic Research with her investigation The Participatory Monument – Remembrance and Forgetting as Art Practice in Public Sphere (2019), and further research projects   Embodied Sound Archive (2020) and Dancing Forest and other stories (2020). Røstad lives and works in Berlin and Oslo and is currently the head of the Master program Art and Public Space Master program and an Associate Professor at the Faculty of Art and Craft at the Oslo National Academy of the Arts in Norway.

Saša Asentić is a choreographer and cultural worker. He is interested in exploring the relationship between the individual and society and analyzing it in terms of social choreography. He works in the field of contemporary dance, performance and disability arts.

Lars Ebert is co-director of H401 in Amsterdam where he develops international co-operation projects on the role of the arts and participation in memory work and heritage. He also maintains an independent practice as curator, facilitator and teacher. He is a board member of a.o. Culture Action Europe and the chair of EQ-Arts.

Suzana Milevska is a curator and theorist of visual art and culture based in Skopje, North Macedonia. She was Endowed Professor for Central and South Eastern European Art Histories, Academy of Fine Art Vienna (2013-2015) and Principal Investigator, Politecnico di Milano, Milan (2016-2019). She holds a PhD in visual culture from Goldsmiths College. She won the Igor Zabel Award for Culture and Theory.